Since we were founded in 2010 Inside Justice has always punched above its weight delivering casework investigations, providing free access to experts and highlighting individual and systemic failings. Our casework empowers individuals convicted of a crime they say they did not commit but our vision is to deliver justice by working with statutory partners to achieve a fair and transparent criminal justice system for all.

Louise Shorter once more not shy of asking difficult & awkward questions. Really important to those investigating Miscarriages of Justice. Sometimes you need to ask questions that might not give you the answer that you would like.

What a truly compelling programme. You just cannot take your eyes off the screen - more please and soon

Once again Conviction has proved to be a masterful piece of television. A compelling case expertly investigated by Louise Shorter. Definitely a must watch! #MurderInSuburbia

It’s been a joy to see the the work of @insidejusticeUK on #BBC2 this week. Louise Shorter and her team are a cracking example of brilliant women leading the way and making a difference. #conviction2

Why We Need Your Help

Our work is only possible through charitable donations and the generous support of the public. We do the work we do because we believe everybody deserves justice. We care because a wrongful conviction destroys lives and trust. A wrongful conviction leaves dangerous people at large to create more victims.

We have built an Advisory Panel of experts who give their time for free because they care. Help us, help others in need.

The latest report from the CPS watchdog, HM Crown Prosecution Service Inspectorate (HMCPSI), has found its baseline performance to be ‘very low, and although there was progress there is still a long way to go before an acceptable standard is reached’. Over half the criminal cases sampled showed the CPS’s charging advice failing to properly deal with unused material, whilst only a sixth of cases of sub-standard police performance were... Read more...

Winston Trew, Sterling Christie, George Griffiths and Constantine Boucher – the Oval Four – spent eight nonths in prison in 1972 for attempting to steal handbags and assaulting a police officer. Det Sgt Derek Ridgewell had set up a plain clothes police operation on the Northern Line. Eight years later, Ridgewell was jailed for conspiracy to steal from mailbags. He died of a heart attack in prison in 1982, at the age of 37.... Read more... 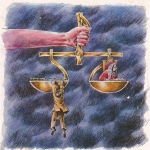 The miscarriage of justice watchdog referred just 13 cases back to the Court of Appeal last year, representing the second lowest number of referrals in its 22 year history. Over the first two decades the Criminal Cases Review Commission (CCRC) sent 33 cases a year on average back to the Appeal judges however the number referrals collapsed with just a dozen in 2017 and still has not recovered. Read more...

The knowledge & expertise of Inside Justice has been invaluable and has taken us to levels we would never have achieved otherwise.

The support we have received has given us strength knowing that we are not alone in our fight for justice.