American Justice and the Value of Celebrity 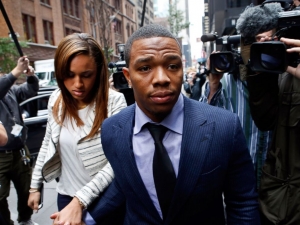 It is not necessarily the case that celebrities are dealt with more leniently in the USA, it may just be that they are better and more experienced at understanding and dealing with the bigger picture. In the cases I have examined, administering justice is now only partially about the law.

picture: Ray Rice arrives with his wife, Janay, for an appeal hearing of his indefinite suspension from the NFL, Nov. 5, 2014, in New York.