BBC Documentary About Inside Justice Case 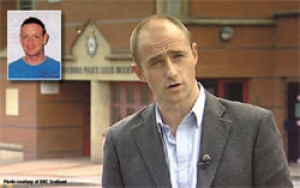 From Inside Time August 2011

The BBC is in the final stages of making a controversial television documentary about prisoner Colin Norris, who is serving a minimum of 30 years for a string of murders he insists he did not commit. (Louise Shorter writes).

Mr Norris, 35, was convicted in 2008 of four murders and one attempted murder of elderly patients at the Leeds hospitals where he worked as a nurse, when a single blood test result suggested a patient on his ward had been given insulin leading to the patientâ€™s death. A review of previous deaths on the wards identified additional similar patient collapses which had originally been considered to be from natural causes. With no direct evidence to implicate Colin Norris, a circumstantial case was built against him. He remained on bail from the time of his arrest in 2002 until the guilty verdicts were delivered in 2008. His first opportunity to apply for parole will be in 2038.

A BBC investigation, to be broadcast later this month, will reveal new evidence which casts serious doubt on the safety of the convictions.

The programmeâ€™s reporter, Mark Daly, told Inside Time he approached the investigation dispassionately and with an open mind.

He said: â€œWe were ready to drop the project if the evidence was not there. But as our research progressed, it seemed to me this prosecution raised more questions than it answered. I think the new scientific evidence we are revealing in this programme could leave viewers thinking this is a case that must go back to the appeal court.â€

Lawyers working for Mr Norris, who is in HMP Frankland, now believe the new science will propel the case back to the Court of Appeal.

Solicitor Jeremy Moore told the programme: â€œItâ€™s my view from having looked at the evidence in the case and from my knowledge of Colin that heâ€™s an innocent man and this conviction ought to be quashed.â€

The BBC was first alerted to the case by Inside Timeâ€™s miscarriage of justice unit, Inside Justice, which was established in 2010 with charitable funding, to assist prisoners who are protesting their innocence. This BBC programme was produced and directed by Louise Shorter who had previously set up Inside Justice and worked on the BBCâ€™s long-running miscarriage of justice series Rough Justice.

Inside Justice is a not-for-profit organisation funded by the Esmee Fairbairn Foundation, the Michael Newsum Charitable Trust and Inside Time.