Can A Juror Be A Victim Too? 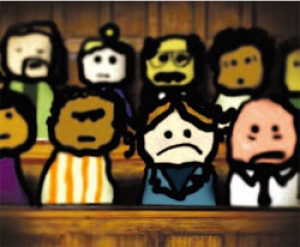 From Inside Time November 2012

Being selected for jury service can be a pain or a privilege, depending on your point of view. From day one in the waiting room he or she has already been influenced, regardless of the trial they are picked for, if the case has had media coverage. The process of press coverage cannot help but give the impression that the police have got their man. Indeed, we as a nation seem easily coerced into the need for closure. Furthermore, little concern is shown for a person who is released after decades in prison because he is found to be innocent, as the furore of the case has long since passed. But how does the jury member that convicted him feel, now with the knowledge, not only that it was a miscarriage of justice, but that the police got him convicted deliberately when they knew he was innocent? New revelations expose the police as liars, falsifying and losing evidence, failing to disclose evidence that would have cleared him. An expert is found to have colluded with the police to obfuscate, misrepresent, confuse and falsify evidence and using jargon that few people understand. The judge then sums up incorrectly because he hasnâ€™t understood the jargon, particularly if the trial involves the DNA process.

It is rare that all this comes to light because the justice system is designed more and more to delay and obstruct the innocent from appealing against a conviction that has been meticulously put together in this way. You have an immediate right of appeal, but it can take years to expose just how the police and the expert colluded. This also costs money which, in the first instance, discriminates against those who do not have it. In the second instance unless you have a solicitor who is high up in the legal hierarchy with plenty of contacts, you are not going to get legal aid.

The juror in this case is at ease with himself because he believes he has made the right decision based on what he believes are the facts before him and, the preconceived influences in the press and other media, his mates opinions in the pub and at work, which seem to justify the faulty verdict.

Imagine then a person who has had their conviction overturned because of the aforementioned discrepancies. He didnâ€™t do it. He wasnâ€™t there. All his alibi witnesses had been telling the truth when you, the juror, chose not to believe them. Since he went to prison he lost everything; his wife couldnâ€™t live without him and died because of the stress. He lost his home, his possessions, his job, maybe even his kids. He lost any friends he thought he had, his good reputation and his dignity, maybe even his mind because of prison. The knock-on effect is almost immeasurable.

With all of this knowledge, how do you, the juror, cope? Or are you not made aware of all of this? Indeed, in some cases, such as where DNS or expert witnesses are involved, should the justice system even be putting all of this on the shoulders of laymen? Trials and appeals keep on surfacing where expert evidence has been deliberately misinterpreted by police and experts but they are few and far between compared to all those who continue to maintain innocence but donâ€™t have or are not granted the funding or opportunity to further expose this systemâ€™s failure. The system keeps a lid on figures and details about overturned convictions and do not make this information readily available. If a juror had all the information after a conviction was overturned shouldnâ€™t he have the right to take some sort of action against those who have fraudulently deceived him into finding an innocent man guilty? Perhaps in the Civil Court?

I wonder if any juror has experience of being put in this position and whether they have an opinion on this. I hope one reads this and comments. We, the innocent but jailed would like to know your thoughts. Were you a victim too, or an unknowing perpetrator?