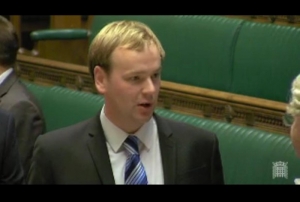 The Criminal Cases Review Commission (Information) Bill, a Private Memberâ€™s Bill, was introduced in the House of Commons last June by William Wragg, Conservative MP for Hazel Grove, and voted through on February 5th. The Bill, which extends to England and Wales and Northern Ireland, aims to increase the CCRCâ€™s powers to obtain evidence.

â€œI wanted to use this opportunity to do some good and improve the justice system in an important way,â€ William Wragg explained. â€œI appreciate that few people will have even heard of the commission, but as anyone who has ever been subject to a miscarriage of justice will attest, it is a deeply traumatic and damaging experience.

â€œWhilst our justice system is one of the most respected in the world, mistakes can and do happen occasionally. When this is the case, the system to right the wrong and protect innocent people should be strong.â€

The Criminal Cases Review Commission is an independent statutory body that investigates alleged miscarriages of justice, and which can require a court to hear an appeal against a criminal conviction.

The Criminal Appeal Act 1995 gives the CCRC special legal powers, under section 17, to obtain information from public bodies such as the police, the Crown Prosecution Service, social services, local councils and so on.  These legal powers mean that the CCRC can access important evidence that would be impossible for others to find.

However, the Commission has no equivalent power in relation to materials that are in the possession or under the control of a person who is not serving in a public body. This power would be covered by a new section 18A to be inserted into the Criminal Appeal Act, by the Bill.

In 2015, the House of Commons Justice Committee noted that the Commission â€œhas long asked for itsâ€¦ powers to be extendedâ€ so as to apply to materials held by private bodies, following the privatisation of certain criminal justice bodies such as the Forensic Science Service.

Although it would seem a reasonable proposition to extend the CCRCâ€™s powers in this way, one reason for caution concerns legal professional privilege, â€œa fundamental human right long established in the common lawâ€, which protects the confidentiality of communications between lawyer and client. This has not been of particular issue in relation to public bodies but the proposed section 18A power could be more intrusive, since it extends to materials that are held outside the public sector, including by private individuals. The power would also allow the Commission access to other material that would normally be covered by an expectation of privacy, including personal medical records.

Under Article 8 of the European Court of Human Rights, the right to legal professional privilege is also limited where it is necessary in a democratic society to do so in order to protect â€œthe rights and freedoms of othersâ€ â€” a purpose that has clear application to the proposed section 18A.

In other contexts, Parliament has implicitly conceded that competing public policy objectives are not sufficient to justify overriding legal professional privilege. Police powers of search and seizure under the Police and Criminal Evidence Act 1984, for example, do not extend to material to which legal professional privilege attaches. The same is true of search and seizure powers under the Terrorism Act 2000.

Section 18A arguably advances a different and stronger public interest, in addressing miscarriages of justice, including the freeing of individuals who are wrongly incarcerated. In 2015, CCRC Chair Richard Foster told the Justice Committee that â€œyou can be confident that there are miscarriages of justice that have gone unremedied because of the lack of that powerâ€.

â€œThe extension of our powers to cover the private sector is something we consider essential to our job of investigation and reviewing potential miscarriages of justice,â€ CCRC Chief Executive Karen Kneller declared in December, following the Billâ€™s second hearing in the Commons.

Safeguards are included to restrict disclosure of information beyond CCRC staff and to necessitate a disclosure order from the Crown Court. As a public authority, the Court, under the Human Rights Act 1998, would need to be satisfied that making an order was necessary and proportionate.

The change would bring the CCRC into line with the Scottish Criminal Cases Review Commission, which already has the power to obtain material from private bodies and individuals.

If the Lords pass the Bill in the next couple of months, it will receive Royal Assent and so become law by the Summer Recess.