Conclusion on the CCRC’s effectiveness 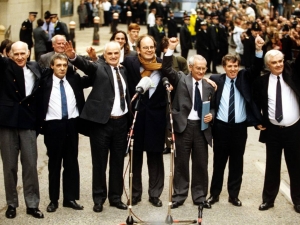 The Justice Select Committee published its report on the CCRC today, following a three-month inquiry. Its conclusions are:

Conclusion on the CCRCâ€™s effectiveness

We conclude that the CCRC is performing its functions reasonably well, and we have identified areas for improvement, but we were struck by the disparity between what critics believe it to be doing and what it claims that it is doing. At times there was complete disagreement, even on objective and factual matters. This indicates that at the very least the CCRC has a problem with public perception, including with the awareness of applicants as to what it can do for them and of all stakeholders, including applicants, their representatives, and others, as to how it operates. The CCRC will never convince its most vociferous detractors, but it could be doing more to ensure that its work and processes are well understood.

The level of successful referrals from the CCRC shows that it remains as necessary a body now as when it was set up. We received very little evidence advocating its abolition, and even its strongest critics have said that they simply want it to improve. The existence of the CCRC is not enough in and of itself; it must be given the resources and powers it requires to perform its job effectively. The fundamental constitutional principle on which our criminal justice system rests and which the Commission exists to uphold is that the guilty are convicted and the innocent go free.

There was a strong difference of views amongst our witnesses on changing the â€˜real possibilityâ€™ test. Any change would have to be undertaken in light of a change to the Court of Appealâ€™s grounds for allowing appeals, and would have to take account of the need to avoid a waste of resources or a detrimental effect on applicants and victims alike. While an alternative test might allow the CCRC more scope to display its independence of the Court of Appeal, by definition the only additional referrals which a change to the test alone would allow would be those with less than a real possibility of success.

We have seen no conclusive evidence that the CCRC is failing to apply the â€˜real possibilityâ€™ test correctly in the majority of cases. We accept that application of the test is a difficult task and is by no means a precise science, but where potential miscarriages of justice are concerned we consider that the CCRC should be willing to err on the side of making a referral. The Commission should definitely never fear disagreeing with, or being rebuked by, the Court of Appeal. If a bolder approach leads to more failed appeals but one additional miscarriage being corrected, then that is of clear benefit.

We recommend that the CCRC be less cautious in its approach to the â€˜real possibilityâ€™ test, and reduce the targeted success rate in its Key Performance Indicators accordingly.

We are concerned that there may be some miscarriages of justice which are going uncorrected because of the difficulty the CCRC faces in getting some such cases past the threshold of â€˜real possibilityâ€™, as a result of the Court of Appealâ€™s approach. While it is important that the jury system is not undermined, properly-directed juries which have seen all of the evidence may occasionally make incorrect decisions. The Courtâ€™s jurisprudence in this area, including on â€˜lurking doubtâ€™, is difficult to interpret and it is concerning that there is no clear or formal mechanism to consider quashing convictions arising from decisions which have a strong appearance of being incorrect. Any change in this area would require a change to the Court of Appealâ€™s approach, which would itself require a statutory amendment to the Courtâ€™s grounds for allowing appeals. We are aware that this would constitute a significant change to the system of criminal appeals in this country and that it would qualify to a limited extent the longstanding constitutional doctrine of the primacy of the jury. Neither of these things should be allowed to stand in the way of ensuring that innocent people are not falsely imprisoned.

We recommend that the Law Commission review the Court of Appealâ€™s grounds for allowing appeals. This review should include consideration of the benefits and dangers of a statutory change to allow and encourage the Court of Appeal to quash a conviction where it has a serious doubt about the verdict, even without fresh evidence or fresh legal argument. If any such change is made, it should be accompanied by a review of its effects on the CCRC and of the continuing appropriateness of the â€˜real possibilityâ€™ test.

We do not think that the CCRC should change its approach to the Royal Prerogative. Greater use of the power under section 16 of the 1995 Act would bring the executive back into the process in precisely the manner that the creation of the CCRC was intended to avoid. In our view, increased use of the Royal Prerogative would be a wholly inadequate and inappropriate answer to the problems that have been raised, given that it does not lead to the quashing of the conviction or the correction of the miscarriage of justice but only commutes the sentence, and so does not provide complete justice for a falsely convicted person.

If the CCRC is to function effectively it must be funded properly. We accept that the Ministry has had to find savings across the board and that it could not have predicted the sharp rise in the CCRCâ€™s workload. However it is now clear that the CCRC is struggling to cope with these additional applications at its post-austerity resource levels and, with the increased workload, is unable to deliver an improved service for less. The current level of delays is unacceptable and must be brought down, and this will inevitably require further funding. As so many of the CCRCâ€™s other issues are also blamed on funding, an increase should also make identifying areas for further improvement an easier task.

We recommend that the CCRC should, as a matter of urgency, be granted the additional Â£1 million of annual funding that it has requested until it has reduced its backlog. Furthermore, the Ministry should engage with the CCRC in longer term budgetary planning so that the Commission can properly plan ahead and recruit efficiently, with a view to restoring it to a level of funding which enables it to eliminate lengthy delays in handling cases.

We acknowledge the serious consequences of every miscarriage of justice for the person convicted, no matter how minor the offence. Despite this, we also think that the effect of overturning a miscarriage in more serious cases is much greater and that the CCRC was originally envisaged as an organisation to deal with such serious cases. Given the serious funding constraints that we have identified, we are persuaded that the CCRC should have greater control over its caseload in order to better focus its resources where they would have the greatest effect.

In order to be effective and to reduce delays the CCRCâ€™s existing section 17 powers to require public bodies to disclose materials need to be supplemented by enforcement measures or sanctions for failure to comply in an appropriate amount of time. We recommend that the Government bring forward legislation to add a time limit for public bodies to comply with a section 17 request, unless there are extenuating circumstances, and an appropriate sanction in case of non-compliance.

The extension of the CCRCâ€™s section 17 powers to cover private bodies is urgently necessary and commands universal support. Successive Governments have no excuse for failing to do this and any further continuing failure is not acceptable.

It should be a matter of great urgency and priority for the next Government to bring forward legislation to implement the extension of the CCRCâ€™s powers so that it can compel material necessary for it to carry out investigations from private bodies through an application to the courts. No new Criminal Justice Bill should be introduced without the inclusion of such a clause. Our successor Committee should monitor the progress of this to ensure that it happens promptly, and should continue to put pressure on the Government if necessary.

We are concerned with the evidence that we have received on the variation between Case Review Managers, both in approach and in terms of expertise. While this does not suggest that there are serious systemic shortcomings in the CCRCâ€™s investigative work, there remains room for improvement even within its resource constraints.

We recommend that the Commission take steps to ensure that Case Review Managers consistently engage fully with applicants throughout the investigation in cases which progress past Stage 1 screening. As a matter of course this should include meeting with the applicant in all cases being given a type 3 or type 4 review, unless there are compelling reasons not to. We also recommend that variations in the experience and expertise of Case Review Managers be dealt with by assigning them to investigations more intelligently, so as to utilise fully their differing areas of proficiency and knowledge.

The Criminal Cases Review Commission, because it is the only body which investigates and refers to the Court of Appeal miscarriages of justice, is in a unique position to identify issues across the criminal justice system which lead to such miscarriages. We welcome the CCRCâ€™s willingness to allow academics to perform research alongside it and the steps it is currently taking to build upon that. We acknowledge that the CCRC is in a difficult position with regard to resources, but we think that there is a great benefit in preventing miscarriages of justice from occurring in the first place. Greater understanding within the criminal justice system of the causes of miscarriages of justice would benefit the falsely accused, victims, public safety and the interests of justice, and could produce a saving in time and in money which would otherwise be spent by the courts and the CCRC in subsequently overturning false convictions.

We recommend that the CCRC should develop a formal system for regularly feeding back into all areas of the criminal justice system, from the police and Crown Prosecution Service through to the courts and the Ministry of Justice, on its understanding of the issues which are continuing to cause miscarriages of justice.