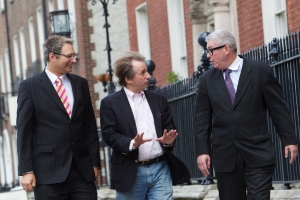 The organisers of the Irish Innocence Project International Conference had lined up an impressive group of speakers including the former Irish President Mary McAlesse and Gareth Peirce, whose name is inextricably linked with the Guildford Four, as well as leading American lawyers like Barry Scheck & Peter Neufeld, the founders of the first US Innocence Project now in its 23rd year.  The conference attracted an international audience from as far afield as Thailand, Israel and across Europe.
The keynote speech was well received, getting comments on twitter from Erin McGuire: â€œWhat a moving talk by Gareth Peirce, the human rights lawyer who represented the Guildford 4 and Birmingham 6â€.
Over 2 days there were events discussing issues from studentsâ€™ learning experiences on university innocence projects to the role of the media in challenging wrongful convictions, and understanding the human cost for those with personal experience of unjust imprisonment.  A selection of international films followed, including a special report from CBS Newsâ€™ correspondent Erin Moriarty on the case of Ryan Ferguson, freed after 10 years.
The highlight of the film festival was the closing event featuring a screening of the award-winning â€˜In the Name of the Fatherâ€™ hosted by its director Jim Sheridan. There was a presentation of an award in honour of Gerry Conlon and attended by members of his family. Speaking to the Irish Independent newspaper about the conference, Sheridan said â€œI am just really happy to be there to try and support itâ€œ.
In a presentation entitled â€˜Innocence, The Seed Plantedâ€™, founder of the Innocence Project, Barry Scheck, and his colleagues showed how they have earned an enviable reputation for successfully challenging wrongful convictions. Their website proudly reports that over the last 3 decades, the work of the Innocence Project has led to the freeing of 329 wrongfully convicted people, including 18 who spent time on death row. Scheck said â€œto teach new generations about wrongful convictions is very importantâ€.
The lawyer also discussed Conviction Integrity Units (CIUs) - a growing innovation in the States where prosecutors and investigators join forces to re-examine cases where there is concern about the safety of conviction some years after trial. With the release of around 30 people found to be wrongfully convicted by the Dallas Unit, this is an approach that has been adopted across the US.   For the handful of special interest journalists, lawyers, students and campaigners battling to challenge miscarriage of justice cases in the UK, this is food for thought. Scheck concluded â€œ[CIUs] are potentially a big developmentâ€¦ less adversarial and more about discoveryâ€.
The founder of the Irish Innocence Project, David Langwallner, commented on the elements needed for a positive student experience:  "Innocence projects fail when led by academics exclusively and a project needs practising lawyers who are also good teachersâ€.
Professor Keith Findley, Law Professor at the University of Wisconsin and former president of the Innocence network, said it's also vital to have students for "One full calendar year so they can take ownership of cases working with a supervising lawyer".
In the UK, we need to learn some of the lessons of success in challenging wrongful convictions from the US.  Notable successes in the UK innocence movement were led by lawyer Julie Price and her students at Cardiff Innocence Project overturning Dwaine Brookeâ€™s murder conviction in 2014.

In the afternoon, we heard from Justin Brooks, a lawyer who heads up an Innocence Project based in California, who brings his years of experience as a defence attorney to bear in the academic setting. The project has four staff attorneys operating within the university to oversee teams of students reviewing and litigating wrongful conviction cases.

â€œThe greatest moment of my career was getting a wrongly convicted man out of prison.  Since 1999, we have released 20 people from prison, assisted in the creation of a dozen new laws related to wrongful conviction, and trained hundreds of law students and lawyers.â€

Not content with this progress, Justin has set up a new project called Redinocente, to assist the formation of innocence projects throughout Latin America.

And in case we thought miscarriages of justice and those who battle to overturn them were new issues primarily occupying students, that evening we heard from the grandson of a man wrongly imprisoned for a murder that happened over 70 years ago.
Kevin Gleeson spoke movingly about his grandfather, Harry, who was hanged in 1941. The Justice for Harry Gleeson group, a group of people who knew Gleeson and his family, persuaded the Irish Innocence project to take the case and battle for recognition of wrongful conviction.

In January this year, after years of campaigning, Harry Gleeson became the first recipient of a posthumous pardon, a legal landmark.

This brings me back to the stated aims of the Irish Innocence Project:

â€¢ To inspire a new generation of young people to pursue innocence and human rights work.

Judging by the conference, they are achieving their goals, in spades!

For more information about the conference and the films screened, follow the link:
www.innocenceproject.ie