Freezers Will Be Cleared

By Louise Shorter on 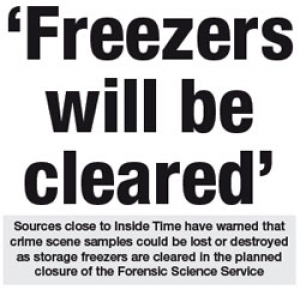 The Government-owned laboratories which employ 1600 people, conduct 60% of all police forensic work, and are making a loss of Â£2million every month, are set for closure in 2012. There has been widespread criticism of the unexpected Home Office announcement among legal and scientific communities from around the world. An online petition, nearing 30,000 signatories from across Europe, Australia and America and beyond, warns that justice may suffer at the loss of the service.

But Inside Time understands there is unease amongst police forces as they wait to hear whether they will be forced to assume responsibility for storing extensive crime scene samples at a time when they are facing budget cuts of 20%. A Transition Task Force, dubbed Operation Slingshot, has been established to oversee the demise of the FSS but has so far failed to communicate their plans to the scientific community and existing police storage facilities.

Dr Peter Bull, a forensic scientist based at the University of Oxford, told Inside Time: â€œthe worrying thing is that we have heard nothing regarding the safeguarding of the fate of the biological samples, or indeed of any other exhibits in store. The preservation of the integrity of the exhibits is not a reversible situation. Once lost they are gone forever... indeed once the chain of evidence is lost they are useless. So what assurances are there in planning or in place for the preservation of vital evidence which is, by and large, the only vestige of hope for those wishing to appeal?â€

Solicitors with experience of miscarriage of justice cases advise that prisoners who are protesting their innocence, who hope to commission new forensic tests to challenge their conviction, should act now to establish the whereabouts of the samples before they are lost in this period of closure.