Glaring Ommissions from the Black Museum

The world famous Metropolitan Police Crime Museum, known as â€˜the Black Museumâ€™, has unlocked its macabre exhibits for the first time in the Crime Uncovered exhibition at the Museum of London, which runs until April 2016. Artefacts and objects connected to Britainâ€™s most infamous murders and Cold War spying are now open to the public.

Set up in the mid-1870â€™s, the Black Museum has collected murder weapons and key evidence used to convict, and before 1964 often hang, the most brutal and sinister criminals in our history. Until now these dark objects have only been viewed by serving Metropolitan Police officers. The Black Museum has amassed approximately 2,000 objects over the decades, many linked to the most notorious and vicious villains. This exhibition displays around 600 of these artefacts, ranging from 1840 to the foiled Millennium Dome Diamond Heist of 2000. To see them in front of you is both shocking and stomach-churning.

This exhibition covers some truly terrible crimes and looks at the dark side of humanity. Some exhibits were left out for ethical reasons, and the curators at the Museum of London have carefully chosen the objects on display, consulting with the London Policing Ethics Panel and the Victimsâ€™ Commissioner.

As Martin Hewitt, Assistant Commissioner of the Metropolitan Police said, â€˜These exhibits provide a unique insight into the development of detective work and the ground-breaking role that the Metropolitan police service has played. Under no circumstances did we want the museum to glamorise crime or the criminals involved.â€™

These objects also helped convict the criminals and gain some justice for the victims and their families.  As Jackie Kelly, the co-curator of the exhibition said, â€˜Itâ€™s not just about true crime, itâ€™s about people.â€™

This is true, and real ethical care has been taken. But one important angle which has not been emphasised enough in the exhibition is the scale of injustice in three of the biggest miscarriages of justice in British legal history: the hanging of Timothy Evans in 1950 for the terrible murders of his wife Beryl and baby daughter Geraldine, actually committed by his serial killer landlord at 10 Rillington Place, John Christie; the hanging of now pardoned 19-year-old Derek Bentley in 1953 for the shooting of PC Sidney Miles atop a Croydon warehouse, when he was already in police custody and the gun was actually fired by his 16-year-old friend and robbery accomplice Christopher Craig; and the hanging of Ruth Ellis for the shooting dead of her allegedly emotionally and physically abusive ex-lover David Blakely in 1955, when she was obviously suffering from a mental breakdown.

These three crimes are displayed at the exhibition, but little attention is drawn to the fact that these were huge miscarriages of justice, and members of the public who know little about these cases, especially younger people and foreign tourists, deserve to know the truth. The development of police investigation and detection is rightly illustrated by the exhibition, but it is only right that the mistakes made by our Governments are also shown clearly, so that we can learn from them as a society.

It has just been announced that the Metropolitan Police is looking for a new permanent home for its crime museum, once this current exhibition ends. It can only be hoped that if and when they do find permanent premises, the heinous and irreversible mistakes made in these cases will be highlighted and explained more clearly for the benefit of the public. 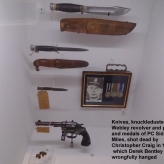 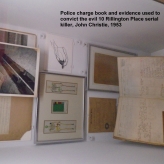