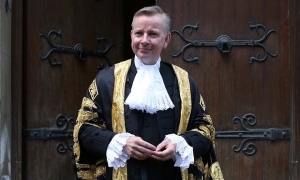 In a letter to Inside Time, a prisoner voices the irony of our Foreign Officeâ€™s response to the recent Saudi sentencing of a booze-bussing Brit to imprisonment and lashes - â€œdegrading and inhumaneâ€ - while he serves an IPP sentence in a British jail - â€œlike being mentally lashed every dayâ€ [A Hussain, Inside Time November 2015, p2].

The very next letter asks â€œhow much more do IPP prisoners have to take before they see the only way to bring attention to our plight is to riot, hunger-strike or, even worse, take their own lives because they see no hope? Surely there must be some way IPP prisoners can challenge this sentence?â€ [Anon, IT Nov 2015, p3]

The contrast to the quote from Michael Goveâ€™s party conference speech, A Chance to Change, is striking:

â€œPrison should offer individuals a chance to change their lives for the better. Committing an offence should not mean that society always sees you as an offender. Because that means we deny individuals the chance to improve their lives, provide for their families and give back to their communities.â€

Sentences of Imprisonment for Public Protection (IPPs) were created by the Criminal Justice Act 2003 and started to be used in April 2005. They were designed to protect the public from serious offenders whose crimes did not merit a life sentence. Offenders sentenced to an IPP were set a minimum term (tariff) to be spent in prison. On completing their tariff they could apply to the Parole Board for release. The Parole Board would release an offender only if it was satisfied that it was no longer necessary for the protection of the public for the offender to be confined.

However, problems soon arose with the practical application of IPP sentences:

â€¢ Some less serious offenders were given very short tariffs but then kept in prison for a long time after these expired.
â€¢ The prison and parole systems could not cope with the need to give all these short-tariff prisoners appropriate access to rehabilitative and resettlement programmes so that they could demonstrate they were no longer a risk to society.
â€¢ The administrative delays resulted in uncertainty and perceived injustice for prisoners and litigation.

â€¢ The rapid increase in the numbers of those on IPPs contributed to prison overcrowding, which in turn exacerbated the problems with providing rehabilitation

In 2007 the Court of Appeal found that the Secretary of State had acted unlawfully, and that there had been â€œa systemic failure to put in place the resources necessary to implement the scheme of rehabilitation necessary to enable the relevant provisions of the 2003 Act to function as intendedâ€.

A prison lifer put it more pithily: â€œIt is as though the government went out and did its shopping without first buying a fridgeâ€ [Her Majestyâ€™s Chief Inspector of Prisons, The Indeterminate Sentence for Public Protection, September 2008].

In 2008 Section 47 and Schedule 8 of the Criminal Justice and Immigration Act 2008 came into force. The effect of these changes was that IPP sentences might only be imposed where the offender would be required to serve at least 2 years in custody. The Act also removed the presumption of risk (requirement for judges to conclude that the offender is dangerous) where there was a previous conviction for violent or sexual crime [https://www.justice.gov.uk/offenders/types-of-offender/life].

Kenneth Clarke, then Secretary of State for Justice, said: â€œThe Parole Board has been given the task of trying to see whether a prisoner could prove that he is no longer a risk to the public. It is almost impossible for the prisoner to prove that, so it is something of a lottery and hardly any are released. We therefore face an impossible problem.â€ [HC Deb 1 Nov 2011]

Reviews of the scheme resulted in the abolition of IPPs in December 2012, and their replacement with different sentences for dangerous offenders. However the change was not made retrospective. It didnâ€™t apply to existing prisoners serving those sentences at the time. Amendments put forward in the House of Lords were withdrawn or not moved.

In 2012 the European Court of Human Rights found that a prisoner's continued detention beyond the expiry of the minimum term of his sentence of imprisonment for public protection without access to rehabilitative courses violated the European Convention on Human Rights [James, Wells and Lee v. the United Kingdom (25119/09 ) (2013) 56 E.H.R.R. 12;18 September 2012].

But in 2014 the Supreme Court found that, whilst the state had a duty to provide a reasonable opportunity for a prisoner subject to an indeterminate sentence to rehabilitate himself and demonstrate that he no longer presented a danger to the public, this duty did not affect the lawfulness of detention [R. (on the application of Kaiyam) v Secretary of State for Justice, [2014] UKSC 66].

A prisoner serving an IPP who wishes to challenge their continued detention will therefore need to seek legal advice in the light of their full circumstances.

In his conference speech last month, Michael Gove stressed the need for education as part of rehabilitation and resettlement: â€œPrison should offer offenders the chance to get the skills and qualifications which they need to make a success of life on the outside.â€

Gove wants to replace Victorian prisons with cheaper, supersized modern facilities. Yet prisoners, experts and officials have criticised teaching and rehabilitation resources available at new supersized prisons. â€œSmaller prisons tend to be safer and more effective than larger establishments, holding people closer to home and with a higher ratio of staff to prisoners,â€  Juliet Lyon, director of the Prison Reform Trust, has said. â€œSlashing prison budgets and introducing harsher regimes while warehousing ever greater numbers overseen by fewer and largely inexperienced staff is no way to transform rehabilitation.â€

Cuts have also reduced Parole Board staff numbers by nearly one in five [the Independent, 17th February 2014], which will inevitably further delay the release of IPP prisoners post-tariff.

At the end of March 2015 there were still around 4,600 prisoners serving IPPs, more than three quarters of them post-tariff [Ministry of Justice, Offender Management Statistics Bulletin, England and Wales Quarterly January to March 2015, p6]. At Â£35,000 to Â£40,000 per prisoner, the post-tariff IPP prison population is costing the taxpayer more than Â£12million each year [https://www.gov.uk/government/uploads/system/uploads/attachment_data/file/367551/cost-per-place-and-prisoner-2013-14-summary.pdf].