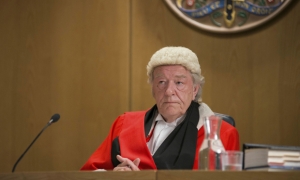 There has been growing concern in legal circles about the law of joint enterprise which allows for the conviction of groups of people accused of being complicit in a crime. It can be any crime but is most often applied to multi handed murder cases and in particular to gang crime. The concern arises because the threshold of evidence is much lower than in single-handed murder cases in which the defendant must be found guilty of intending to cause death or serious harm. In joint enterprise it is not only the person dealing the fatal blow or firing the gun who gets a mandatory life sentence â€“ 25 years for a knife, 35 for a gun â€“ it is others who are also there and who are convicted under secondary liability in joint enterprise cases. There is no requirement to prove intention on their part, only foresight â€“ you know heâ€™s violent, heâ€™s your friend, you must have known he was carrying a gun/knife and you were there, and by your presence encouraged the crime.
If  a group of people are involved and the evidence supports this â€“ as it did in the Stephen Lawrence case â€“ then justice is done fair and square. There are many cases like this, if you are complicit, if you encourage, if you knew and went along with it -  you have got it coming to you. Nobody would argue with that. These are the ones we hear about and our sympathy goes naturally and rightly to the families of victims and the enduring tragedy they suffer for the rest of their lives.
But there is another story and that is of the people who are convicted and perhaps shouldnâ€™t be. This is the story told in Jimmy McGovernâ€™s BBC drama Common (Sunday July 6th,BBC 1) and the issues are raised forcefully in  Fran Robertsonâ€™s documentary Guilty by Association (Monday July 7th BBC 1)
McGovernâ€™s play and Robertsonâ€™s documentary donâ€™t come out of the ether. They have their roots in criticism dating back to 2007 when the Law Commission found that â€œthe doctrine of secondary liability has developed haphazardly and is permeated with uncertaintyâ€¦â€  The Law Commission drafted a Bill proposing a new approach. The government at the time accepted the recommendations but refused to implement them. Nothing has changed.
Three years later The Justice Select Committee discussed joint enterprise and chairman Sir Alan Beith concluded that the current state of this law is â€˜so complex that juries might find it impossible to understand how to reach the right verdict.â€  At the time there was no data on the prevalence of the use of joint enterprise and no guidelines for the CPS. Guidelines were duly produced. In April the Bureau of Investigative Journalism published data for the first time showing the extent of the use of the law in multiple handed murder cases.
Between the years 2005 â€“ 2013, 1853 people were prosecuted for homicides involving four or more defendants, around 17 per cent of all homicide trials. In the same period 4590 were tried for homicides involving two or more, 44 per cent of all homicide prosecutions. The work that has yet to be done and wonâ€™t be as there is no political will â€“ there are no votes in convicted criminals -  is to run test cases and establish how many convictions under secondary may be unsafe in the light of concerns expressed by leading legal figures. Professor David Ormerod QC, the Law Commisioner, told the BIJ: â€œ Itâ€™s possible because of [its] complexity that it has been applied incorrectly. Even if you made the law on joint enterprise crystal clear, that leaves the question whether the law on murder is fair when applied in such cases. Is it fair that someone be convicted of murder if they have foreseen as a possibility that someone else might intentionally kill or cause serious harm?â€

Joint enterprise is common law and as such developed case by case. It is disturbing that the law is so cru cially influenced by public policy considerations. In the House of Lords in 1999, during legal debate on the case known as R V Powell and English, Lord Steyn said: â€œThe rules of common law are not based solely on logic but relate to practical concerns and in relation to crimes committed in the course of joint enterprises, to the need to give effective protection to the public against criminals operating in gangs.â€  He added: â€œIn the real world, proof of an intention sufficient for murder would be well nigh impossible in the vast majority of JE cases.â€

Lord Falconer, formerly Tony Blairâ€™s Lord Chancellor said on Radio 4 in 2010 : "The message that the law is sending out is that we are very willing to see people convicted if they are a part of gang violence - and that violence ends in somebody's death. Is it unfair? Well, what you've got to decide is not 'does the system lead to people being wrongly convicted?' I think the real question is do you want a law is as draconian as our law is, which says juries can convict even if you are quite a peripheral member of the gang which killed? â€¦the view of reasonable people is that you probably do need a quite draconian law in that respect."

The beam is pointed the wrong way at the boys who run with the gangs and not at the disturbed few, the ones who cross the line and kill. It is socially excluded, damaged young men for whom life is cheap because they think their own lives are worthless, who plunge the knife and use the gun. The law may deter a few but it does nothing to catch these young men before the conditions of their life have turned them into killers. Until the ministers make it their business to listen to the youth workers who are doing their best to rescue and inspire those boys before they spin out of control, the killing will go on and the law will sweep up those who may well not deserve to go to jail for long sentences.  A wise minister would spend the money on enlightened prevention, not locking people up.
http://www.thebureauinvestigates.com/2014/03/31/joint-enterprise-a-definition/