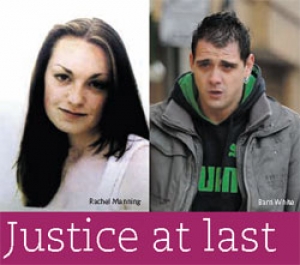 From Inside Time October 2013

Justice at Last
As Shahidul Ahmed was taken down to start a life sentence for murder last month, life began again for Barri White and Keith Hyatt. As they later told the nation's press, this was "the final page" of a nightmare which, for the past 13 years, had seen them at the centre of a terrible miscarriage of justice. And they had another important message. "If it wasn't for Rough Justice, I wouldn't be sitting here right now, a free man," Barri White said. "The help they gave to me was amazing." This case is an example of how campaigning organisations and the media can change lives: not just the lives of innocent men who have been wrongly imprisoned; but in ensuring that crimes are properly solved so that dangerous people do not hide behind wrongful convictions. For without Rough Justice, nobody would have even been looking for Shahidul Ahmed.
In December 2000, a young woman called Rachel Manning left a nightclub in Milton Keynes with her boyfriend, Barri White. The pair had spent the evening with family and friends, celebrating a birthday, but as the evening reached its end and clubbers poured out onto the chilly streets, events took a terrible turn, which would ultimately see Rachel Manning dead and Barri White serving a life sentence for her murder.

In 2002 I was a TV Producer of the BBC's long-running miscarriage of justice series, Rough Justice. A letter came into the office like any other: it was from a family asking for help. Their son Keith had been convicted of perverting the course of justice; the jury believed he'd helped his friend Barri White to dispose of his girlfriend's body after Barri had strangled her during a row on the streets of Milton Keynes. Keith had been told a charge against him would be dropped if he gave evidence that his friend had killed but he knew Barri could not have done so because the two men had been together. Keith refused to buckle; he got 5 years and Barri got life.

For the next two years, working with dogged reporter Mark Daly, we re-investigated every aspect of the case. The most startling discovery made early on was that much of Barri and Keith's movements that night could be proved by the wealth of CCTV cameras which littered Milton Keynes. Both men gave exactly the same account of that fateful night and every time it could be verified, it was borne out by the evidence. This was what the jury heard: if Barri and Keith had murdered Rachel and disposed of her body 8 miles away they'd carried the body over fences, up a muddy embankment, carried out a posthumous attack to disfigure the face and got back into the van without taking any mud, blood or debris from the scene with them, all within a window of 13 minutes. It appeared outlandish and yet the jury had convicted and pretty much everybody in Milton Keynes, apart from the two men's families and friends, thought they were guilty. That was our starting position at the BBC.

Rough Justice was a national institution. 10 years ago, when the programme was still on air, it rarely needed an introduction and many experts agreed to help with a case simply because of the reputation of the programme. One of those people was Dr Peter Bull, an expert in Physical Geography at the University of Oxford.

The most damning area of evidence against Barri and Keith came from an expert called Kenneth Pye, who claimed he had "extremely strong" evidence that Rachel Manning had sat in the front seat of Keith Hyatt's van. He said a combination of "rare particles" had been found trapped in the stretchy fabric of the victim's skirt and the same combination of rare particles had been found on Keith Hyatt's front seat. Finding them in both locations, he said, meant the skirt must have come into contact with the seat. Post conviction, Dr Bull set about testing these assertions. We arranged for a van seat, identical to the one from Keith's van, to be sourced from a breaker's yard, and transported to Dr Bull's lab in Oxford. Over the course of a year he led a team, intent on testing this evidence.

The value added to any investigation by the input of an expert such as Dr Bull is enormous, but particularly so for the innocent soul, incarcerated and powerless in a cell. Rough Justice meant experts, and the prospect of justice, were suddenly accessible.

In 2005 our Rough Justice film was broadcast. It revealed the new evidence Dr Bull and another expert Dr Andrew Moncreiff had found which showed that Kenneth Pye's claims in court had been entirely without foundation. As Mark Daly says the assumptions were "not just untested but completely wrong." In 2007 the men were acquitted, it was a good day for Rough Justice and yet soon the programme would be axed and its 27 year history, responsible for finding new evidence which led to a total of 18 innocent people freed would come to its own tragic end.

In 2010 Inside Justice, this paper's miscarriage of justice investigative unit was established. Transferring the skills I'd learned at Rough Justice we set out to help innocent prisoners who no longer even had the support of a dedicated, investigative media team equipped with the contacts and knowledge necessary to succeed on that long road to freedom post conviction. Central to Inside Justice is an Advisory Panel of experts who help identify truly deserving cases and new work which can be done. Dr Bull is one of our panellists and so too a vital member of his team who worked tirelessly beside him on Barry and Keith's case; Dr Ruth Morgan who now heads the Jill Dando Institute of Crime Science at University College London. Key to the next chapter in the Rachel Manning murder case though is another of our panellists: Tracy Alexander, former Head of Intelligence at the Metropolitan Police and now Cold Case Leader at LGC Forensics. The Rachel Manning murder case landed on Tracy Alexander's desk like any other; with Barri White's murder conviction quashed, the murder was officially unsolved and so it became another 'cold case' for the scientists at LGC to re-examine.

The breakthrough came when DNA found on the steering lock which had been used to bludgeon Rachel Manning was found to belong to a man called Shahidul Ahmed. Convicted of a sex attack on another young girl in 2010, his DNA had ended up on the National Database and so suddenly the scientists had a name and evidence with which to work. Ultimately they found two different sources of DNA which linked him to the murder, police enquiries revealed he'd disposed of his car eight days after Rachel Manning was murdered and he worked near to where Rachel Manning had disappeared. Sentencing him, Judge Wilkie said "For almost ten years you lived undetected with the knowledge of what you had done. You must have been aware that two other people, Barri White and Keith Hyatt, had suffered the agony of being accused, convicted and imprisoned for offences of which they were wholly innocent... nothing can bring back either Rachel's loss or their lost years."

Whilst Thames Valley Police has issued a formal apology to both men, the Ministry of Justice has, thus far, rubbed salt in the wound. Since their release in 2007 the Government has refused Barri and Keith compensation. Keith Hyatt told Inside Time "not innocent enough was a common phrase often used... they accept we won our appeal and had our convictions quashed, but then go on to say you might have done it." Since their release neither man has been able to find work. Both struggle every day to come to terms with what has been done to them. The Ministry of Justice has refused to comment but Keith Hyatt says a letter received since Ahmed's conviction says the case is being considered again by Justice Secretary Chris Grayling.

On the day Ahmed was convicted the BBC was back in the headlines. As Duncan Campbell wrote in The Guardian "how poignant that the trial verdict should come the same day it was revealed that the BBC overpaid bosses Â£2m in severance". Poignant indeed as budget cuts were widely blamed for the demise of Rough Justice. Asked by Jeremy Paxman on BBC Newsnight's programme whether "it would have been easy for a person who didn't have the resources of Rough Justice behind them" to get their conviction overturned, Keith Hyatt responded immediately that it would have been "impossible." Public interest in how this case was solved has led to a media storm. Social media has been buzzing with demands for Rough Justice to be reinstated. Perhaps the time really has come for a return to this true public sector broadcasting.

Inside Justice, part of Inside Time is funded by charitable donations from the Esmee Fairbairn Foundation, Newsum Charitable Trust, Inside Time and the Roddick Foundation.