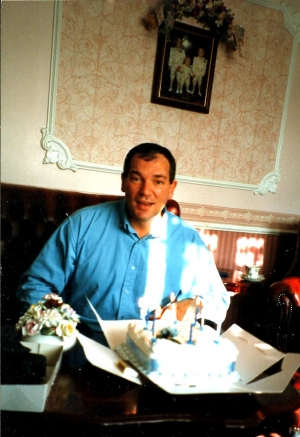 Terry Smith always signs his letters â€˜Strength and Honour as always!â€™ The sad fact is that Terry needs both qualities in abundance: strength to get through every day, and honour to maintain dignity; for, since February 2010, he has been serving an indeterminate life sentence (no fixed tariff) for a string of seven cash-in-transit robberies committed between 2006 and 2008. As Terry himself says, it is â€˜a massive and deliberate miscarriage of justice.â€™

The robberies netted Â£172,000 in total. The most serious charge was related to a raid on 25 May 2007, outside Rayleigh train station in Essex, when have-a-go-hero Adam Mapleson, then 25, came to the aid of a female security guard, and was shot in the chest, almost definitely by accident. Mapleson was lucky to survive. Brian Wall was convicted of the shooting through DNA, and is also serving an indeterminate life sentence. Terry says that at the time of the raid at 7.13am, â€˜I was in bed with my wife and 7-year-old son ten miles away in Canvey Island, Essex.â€™

Terry was an armed robber in the 1970s and 80s, receiving fifteen years for a â€˜basic cashbag snatchâ€™ from a Brinkâ€™s-Mat security guard delivering to a Lloyds bank branch in Essex in June 1983.  But in November 1984 he was sprung from a prison van by associates en route from Maidstone to Parkhurst Prison, and spent 18 months on the run before being re-arrested and receiving sixteen years in June 1986. Terry vowed to go straight, took GCSEs and Open University courses, passing with distinction. â€˜Once released from prison, I decided I would never do anything again to jeopardise being close to my loving wife and family.â€™ Terry is still married to Tracey, and they have three sons and a daughter.

As a writer who has published five true crime investigative books and a freelance journalist specialising in crime, I must admit that, when I first approached Terry, I was most interested in the fact that he was a true crime writer serving life than in his proclamations of innocence. But I did have an open and curious mind - I could see on the Miscarriages of Justice website that there were discrepancies in the evidence which convicted him and, having read widely about many miscarriages of justice, I knew it was very possible that he was innocent.

I visited Terry in HM Prison Swaleside, found him very straightforward and salt-of-the-earth in the truest sense, and came away wondering if he really was innocent. Shortly after, I published an article about Terry in the Daily Star Sunday. We continued to correspond, but other writing commitments meant that I wasnâ€™t focused on Terry for some time. Then, in May 2014, I received a dossier compiled by Terry, listing all the strange points of questionable prosecution evidence that put him away. It is a powerful document and, by the time I had read it for the second time, I was completely convinced that Terry Smith is innocent of the charges against him.

Arrested for the cash-in-transit robberies on 15 May 2008, Terry underwent 26 ID parades, where he was misidentified as the wrong height, colour and creed - the witness had seen the robber from a distance of fifty metres for five seconds and had described him as a â€˜black-haired, 5ft 4in Indian manâ€™. Terry is white, with salt-and-pepper hair, handsome features, a powerful build, and about 5ft 10in tall. Terry also claims that this witness had seen him talking about crime on TV prior to the ID parade. There was also evidence at the trial that Terry had been observed by two police surveillance teams following an old Mercedes Loomis cash van in Basildon, Essex. Terry had explained that he was carrying out research for his book Blaggers, Inc but this was denounced in court by the police as â€˜a big fat lieâ€™, and Terry alleges that the police substituted the old Loomis van in the evidence for a newer Ford Iveco model.

There was no independent corroboration of the Crownâ€™s case. At his first trial in May 2009, the jury was discharged, but nine months later a second trial convicted Terry. This was based on Loomis tracking documents, and Terry is adamant that this evidence is unreliable and unsafe. Terry is certain that he has been a victim of a conspiracy between the British Transport Police, Essex Police and Loomis Management, using â€˜manufactured Datatrack documentsâ€™. In fact, Terry has learnt that the specific Loomis vehicle was being monitored by a police ANPR system elsewhere in Essex at the time of the robbery at Rayleigh station.

There seem to be major discrepancies in the documentation, which give the appearance of alterations being made, even the misspelling of a place name, which an automated mainframe computer system would surely have spelt correctly. There are also numerous distance, time and speed anomalies. Additionally, on requesting CCTV footage of the relevant day for day of the Rayleigh station robbery, Terryâ€™s team was informed that CCTV was only archived for 48 days. Similarly, three key Loomis employees, who Terry claims gave false evidence at his trials, have left Loomis, and their work computers have been wiped of all data relevant to Terryâ€™s case, according to Loomis Head Office.

I contacted the British Transport Police (BTP) in late 2012, to ask to interview Det. Chief Inspector Michael Field, who had led the investigation into the cash-in-transit robberies, which was named Operation Cobalt. I was told I could not speak to Field as he had resigned. Following that, a Freedom of Information request to BTP by Terry Smith himself revealed that Field, a recipient of a Queenâ€™s Police Medal (QPM) for Distinguished Service in 2010, had retired early. Likewise, the detective in charge of the very questionable identification evidence at Terryâ€™s retrial, Det. Constable Philip Caldwell, has also left the force prematurely, as has the disclosure officer, Det. Constable Martin Hand.

Terry Smith had earlier made an allegation of serious police misconduct by BTP and, when he asked if these resignations were in relation to this, BTP refused to confirm or deny it. Terry has also learned from the Independent Police Complaints Commission (IPCC) that Inspector Russell Bush of Essex Police, who was in charge of ANPR data tracking in Terryâ€™s case, has been demoted to the rank of Police Sergeant as he â€˜had tendered false evidence at Mr Smithâ€™s trial.â€™

Terry Smith needs a legal expert/campaigner with clout to get behind his case and take it to the Court of Appeal. How many more years must he spend behind bars? Terry Smith is no George Davies - Terry went straight years ago.

To contact Terry, write to: Terry Smith, A8672AQ, HM Prison Swaleside, Sheerness, Kent ME12 4AX or email [email protected]
**
The picture is of a younger Terry Smith in happier times.