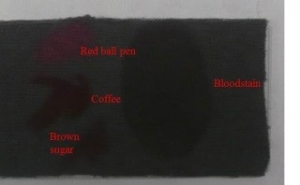 In an early and often cited example of the use of blood evidence, a 12th century Chinese magistrate investigating a murder, observed that flies landed on the blade of a sickle belonging to one labourer and not on those of other workers. The magistrate suggested that this was because the flies could detect otherwise undetectable traces of the victimâ€™s blood, and that this proved guilt. Apparently the labourer later confessed, but can we be certain of how the confession was obtained? As well as being cited as a very early example of both blood evidence and forensic entomology (1), perhaps this should also be cited as an example of the importance of sound science.

The use of blood evidence developed from this questionable beginning with the development of more reliable chemical tests, such as the Luminol test. Although these are powerful and reasonably specific, they are also prone to some potential false positive results (2) and are somewhat disruptive to administer at the crime scene. Because of these issues, examiners normally test areas only when they already suspect blood evidence is present, perhaps leading to missed evidence when the traces are small or latent, or if stains are located on dark backgrounds.

The above image shows several stains on dark cotton including blood.

Hyperspectral imaging (HSI) has recently been shown to be a promising alternative. Not only might it revolutionise the detection of stains, it may offer important additional information, such as the age of the stain. HSI is non-destructive: as the investigator simply takes a picture using a device not unlike a digital camera, there is no need to treat, disturb, or even come into contact with the surface being studied.

Most digital cameras capture information for each point on the picture in three bands (representing the colours red, green and blue). As our eyes work in a similar way, this limited data gives an image that our eyes interpret as full colour. HSI extends this to allow the capture of information in many more bands. One system in development currently captures 56 discrete bands. While this is much more information than our eyes can cope with, computer analysis allows us to identify the location of specific substances in the image according to the characteristic subtle pattern of bands which they reflect or absorb in a way that would not be possible using only three bands.

One substance which can be detected and identified in this way is haemoglobin, a component of blood, which absorbs light strongly and characteristically in the blue part of the visible spectrum. It is this absorption, and reflection of other light, which gives blood its distinctive red colour. Other substances also absorb blue light and so will appear red to our eyes, as well as to any camera using a three-band (RGB) sensor, but the detailed pattern of absorption and reflection will always be different to that of haemoglobin. Our eyes are not aware of these details so we find it hard to be certain if a red patch is due to blood or something else (e.g. red ink or tomato sauce) but the HSI system can be quite specific; a 56-band sensor reveals the subtlety of the absorption pattern in a way that can positively identify whether or not the absorption is due to haem.

Although HSI is not yet quite as sensitive as the best chemical tests, it is sensitive enough to detect blood even in washed garments. It is also much more specific than the chemical tests: so far no false positives have been discovered. Furthermore, as the blood stain ages, the absorption pattern changes. The stain changes colour and becomes reddy-brown, introducing the potential for visual confusion with other stains (e.g. coffee or chocolate). Not only can the HSI system still allow confidence that it is blood, it is this change in the absorption pattern that can be used to estimate how old the stain is (3,4).

Having detected the blood, there are three main ways in which the evidence can be used. HSI offers advantages in all three applications.

Blood spatter evidence has long been used in reconstruction of the events of crimes, with many examples of important insights (5). For best results, the investigator needs to know the shape and exact location of each mark and this is easiest when the marks are obvious and were all made during the same event. While existing techniques allow overlapping stains from a sequence of events to be partly characterised, and chemical tests may help locate less obvious marks, HSI may allow a much simpler and more detailed reconstruction of events by locating, confirming and imaging even small or faint marks without disturbing the scene (6).

Still more exciting is the potential to provide the relative age of stains, allowing investigators to be clear about the order in which blood marks were made. It may even be possible to determine the age of fresh stains to within a few hours and older stains to within a few days, allowing investigators to correlate blood evidence with time of death estimates or to check alibis (3).

Whilst HSI will allow us to confirm that a mark is or is not blood even when the image is taken long after the event, it is necessary to collect the HSI data as soon as possible to allow the most precise estimates of age. The team developing the technique recently received an enquiry relating to a suspect whose blood was discovered at a crime scene. The suspect admitted being at the scene many years before the crime and suggested that this was when the blood was deposited. An HSI image taken on discovery of the scene would have allowed the age of the stain to be confirmed with enough precision to confirm or deny this explanation, but unfortunately by the time the enquiry was made, years after the event, it would only have been possible to confirm that the blood was â€˜very oldâ€™.

Biological identification of suspects started in earnest with the use of ABO blood groups to at least exclude individuals. This became increasingly useful with the development of more sophisticated groupings, but the step change to truly modern investigation didnâ€™t occur until DNA analysis allowed much more positive identification of individuals based on tiny traces of blood (7).

Such powerful use of tiny traces has placed still greater emphasis on the rapid, sensitive and reliable identification of blood at the scene. This may soon be advanced by the use of HSI to unequivocally and efficiently detect traces that can be productively analysed using these still relatively expensive DNA techniques. The great advantage of HSI will be that it will be possible to use it to scan a wide area rapidly, or to look at an especially interesting area in detail, without contaminating or disturbing the evidence.

Fingerprint evidence is even better established and fingerprints in blood are commonly observed. Enhancement of faint prints is possible with chemical methods or the use of ultraviolet illumination, but incorrect application may result in a loss of ridge detail or interfere with subsequent recovery of DNA material. HSI has recently been shown to overcome these limitations (8,9).

In conclusion, Hyperspectral Imaging utilizes many more spectral bands than the three used in normal RGB cameras, making it possible to specifically locate and characterise particular chemicals, particularly haemoglobin from blood, within the image. This offers the potential to advance crime scene investigation in three main areas. Firstly, it allows better imaging of blood spatter and estimation of the relative age of blood marks. Secondly, it helps locate and identify blood marks for subsequent biological identification and finally it helps in the imaging of faint and latent fingerprints where blood is present. All of this can be done without disturbing the scene or using chemical enhancements.

The technique is still relatively young, however, and is not yet quite ready for routine use at the crime scene; further work is needed to produce robust instruments that are as easy to use as a normal digital camera, to calibrate the aging algorithm so that it works reliably in real crime scenes, and to trial and validate the methods to the satisfaction of important jurisdictions. Nevertheless, the principles are now well established.

Current developments have focused on the visible spectrum and thus on blood stains, but even more progress can be made when the method is extended beyond the visible to allow detection and characterisation of other biological evidence (sweat and semen) and even drug and firearms residues. 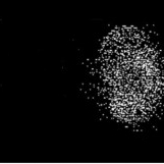