The Case of Margaret James 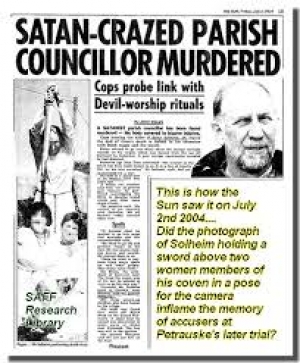 Margaret James had been Solheimâ€™s partner for several years, and had struggled with aspects of his behaviour. The Prosecutionalleged various motives for the killing. One was money, although Margaret had significant savings, and the claim that Solheim was about to leave her in favour of his long term mistress. Margaret denies these claims and says that as far as she was aware, she last saw Solheim as he waited for a friend â€“ â€œCharlieâ€ for a fishing trip, and in the days following his departure she â€“ and his mistress â€“ received text messages from his phone. These texts took on a huge significance at the trial.That the police attention alighted on Margaret followed the intervention of the boyfriend of Margaretâ€™s daughter, who was accused in Court of being a drug dealer and who was a police informer. He claimed that Margaret had asked him about finding people to kill Solheim several months before his death. There is nocorroboration to this claim and the Judge cautioned the jury about weighing the evidence from such a source.Solheimâ€™s personal life became a significant feature of Margaretâ€™s trial. That Solheim had a long term mistress was accepted evidence, but the suggestion that he was about to leave Margaret for this mistress is one of the unresolved issues in this case. Margaret claims the mistress is a fantasist. Equally, the man Margaret says Solheim left with Charlie has never been found by police, the implication being that Margaret invented him as her alibi. In contrast, Charlie was also referred to by a prosecution witness, who recalled Solheim mentioning him during a conversation about buying illegal machine guns. The identity, existence and whereabouts of â€œCharlieâ€ remain unresolved.In the days following Solheim last being seen alive, and the discovery of his body, both Margaret and his mistress received textsseemingly sent by him. They were certainly sent from Solheimâ€™s mobile. This evidence was weighty in Court. Prosecution experts claimed that the data shows that the mobile belonging to Solheim was physically close to Margaretâ€™s mobile. The implication being that Margaret had Solheimâ€™s mobile and was sending the texts to herself in order to create the impression that Solheim remained alive. The Defence presented evidence to show that, because of the terrain and sparsity of mobile signal masts, Solheimâ€™s mobile could seem to be much nearer to Margaret than it actually was and that Solheim could, in fact, have been sending these texts from a boat off the coast.The murder of Peter Solheim attracted media attention because of its unusual elements. Solheim was a pagan priest and a witch, whoharboured books and poisonous potions that experts said in court were an impressive collection. After his death these activities took amore sinister turn when Solheim was named in the trial of two men for ritualistic child abuse: â€œmurder victim was in child abuse gang that used daggers and gowns to frighten young victimsâ€ was the Daily Mail headline.The case has never been closed by the police as, even if the prosecution case is right, it is known that Margaret could not have killed Solheim alone and would have needed accomplices. Several years after the murder, two men were arrested, then released, for being his killers but neither the police, CPS nor the Courts have allowed Margaretâ€™s lawyers to know any information about these suspects.

The case of Margaret James leaves several questions unanswered:â™¦ Who else has been questioned by the police about this case? Are those arrests relevant to the safety of Margaret Jamesâ€™ conviction?â™¦Was Peter Solheim about to leave Margaret for his long term mistress?â™¦Did Solheim actually get onto his boat with a man called â€˜Charlieâ€™? Who and where is â€˜Charlieâ€™?â™¦ Can the mobile phone evidence be reconciled to determine whether the texts sent after Solheimâ€™s death came from Margaret herself or his killers out at sea?â™¦ Is it possible to tell whether injuries to Peter Solheim were caused by a propeller or other injury caused after falling from a boat?â™¦ Does anyone remember Peter Solheim? What can you tell us about him?