The Long Walk to Freedom

By Julian Young on 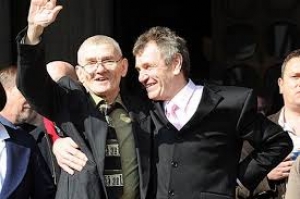 From Inside Time issue June 2009

Sean Hodgsonâ€™s Lawyer Julian Young asks: what of the future in possible cases of miscarriages of justice involving DNA evidence?

27 years and 1 month after conviction, and less than 12 months after my colleague Judy Ramjeet and I started work on Sean Hodgsonâ€™s appeal, his conviction was quashed and he was declared an innocent man. He was able to walk free from the holding cells with his paltry Â£46 release grant and into the spring sunshine to meet his family and the massed media.

Sean faces a different world from that which he knew 30 years ago. The Internet, numerous television channels, mobile phones, the hustle and bustle of London and the cost of living in London are some of his problems. It will be a long struggle until he is able to live a normal life. He seeks compensation for his wrongful conviction and imprisonment â€“ and the Government will be deducting the cost of â€˜board and lodgingâ€™ from his compensation â€“ and he looks to the FSS for damages for an error which took place 10 years ago. These are issues to be taken up in the next few months.

What of the future in possible cases of miscarriages of justice involving DNA evidence? The Media asked me if there were any further cases of a similar nature in the system. It is impossible to give a definitive answer â€“ perhaps readers of Inside Time can respond to that question.

I would advise anyone convicted of an offence before DNA testing was available and who believes that DNA analysis could show their innocence, to contact a solicitor as soon as possible. Legal Aid is available and Solicitors would have to obtain files from storage or former Solicitors or copies from the police forceâ€™s prosecuting authority, DPP or CPS.

Thereafter the papers would have to be checked, the evidence analysed, funding obtained for independent DNA testing and Counsel or a Solicitor Advocate instructed to consider the evidence and draft Advice and Grounds of Appeal against Conviction.

Solicitors can arrange for the whole investigative process to be checked to ensure that the correct procedures were followed by the original investigating officers. All this will take time â€“ it should be noted that the case of Sean Hodgson was dealt with in an exceptionally short time. Frustrating though this may be an inmate must understand that Solicitors will have to secure funding from the Legal Services Commission. I must stress that each case is different and most cases will take considerably longer to resolve than that of Sean Hodgson.

This depends on the facts, evidence and whether a formal referral has to be made to the Criminal Cases Review Commission. However, it isn't just pre-1987 cases that should be considered for re-investigation.

Although forensic DNA analysis has been in use since 1987, the methods used nowadays are quite different and much improved. It is possible to get DNA profiles from much smaller samples than was the case even a few years ago, and specialist techniques, such as Y-STR DNA analysis that selectively target male DNA, can be used now, in addition to standard DNA analysis. With regard to the retention of samples, I understand that FSS Ltd managers have been aware that they have been running out of storage space and FSS Ltd has been much more active in destroying retained materials, in accordance with the memorandum of agreement that exists between FSS and ACPO as a consequence of PACE. It may be that some element of luck will still be involved with regard to tracking down potentially useful material from even relatively recent cases.

So, it is not words from me, but action by anyone who believes that they are innocent and that new DNA tests or analysis can assist them in an appeal against conviction that must be taken. This should ensure that there are no more Sean Hodgsons, that is innocent people, in prison. Find a competent solicitor who is prepared to examine your case and consider and advise in connection with an appeal against conviction; such solicitors do exist, as Sean Hodgson can confirm.