THE LUTON POST OFFICE MURDER: DRURY OF THE YARD 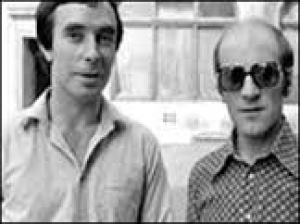 Ex-Commander Kenneth Drury, former head of the Flying Squad, was notoriously imprisoned in July 1977, along with a Sweeney Inspector and numerous members of the Obscene Publications (Dirty) Squad, including itsâ€™ head, ex-Chief Superintendent â€˜Wickedâ€™ Bill Moody, for shocking, lucrative and deeply corrupt links to Soho pornographers and gangsters.

In the previous year, on 30 March 1976, Drury was in the dock at a pre-trial hearing at Bow Street Magistrates Court, facing those charges, along with eleven other suspended or prematurely retired Metropolitan Police officers. A young man, dressed very casually, suddenly stood up in the public gallery and started shouting at Drury in front of the court. â€˜You know me! You picked up my brother Cooper for the Luton murder!â€™ There was no reaction from the already red-faced and greasily sweating Drury. The young man was referring to Druryâ€™s most venal known corruption.

Just before he was promoted to Commander and became Head of the Flying Squad, Drury was a Chief Superintendent in the Murder Squad. In 1969, he was sent to Luton to investigate the Luton Post Office Murder, a high-profile case in which a sub-postmaster named Reginald Stevens was shot dead by an armed gang in a failed robbery. Drury framed three innocent men- Patrick Murphy served four years, while David Cooper (real name John Disher) and Michael McMahon served eleven years, only released after the publication of the influential writer and justice campaigner Sir Ludovic Kennedyâ€™s book about the Luton case, Wicked Beyond Belief, was published in 1980.

There is a final interesting insight into the Luton Post Office Murder, which has never been known before. Inside the Metropolitan Police Files accessed under Freedom of Information, there is a statement made by Drury, on 10 March 1972, almost two years after Murphy, Cooper and McMahon started their life sentences. Drury was giving an internal police statement in relation to the Soho corruption allegations made against him, for which he would eventually be convicted and receive eight years, reduced to five years on appeal.

The Luton Post Office Murder was not relevant to this interview. Inextricably, Drury brings it up, with no provocation or any question about it being asked. Drury mentions The Sunday Times newspaper and another regional newspaper, the Redbridge Gazette, and two particular unnamed journalists, who had been â€˜diggingâ€™, as part of a campaign to get Patrick Murphy released. This had of course happened in the November of the following year, four months earlier. Jimmy Humphreys is mentioned, as he was central to the corruption charges then facing Drury, and one reporter was obviously sniffing around Humphreys too.

Itâ€™s easy to picture the scene. Drury is under pressure for his career and perhaps even his freedom, and he sees that the whole corrupt web he has woven could be unpicked. He gets his say in about the Luton Post Office Murder, in a formal statement, in case it comes up in police inquiries into his professional misconduct. Accusations he makes about a journalist having a grudge against him, and who he claims is out to get him, is a nice touch. Druryâ€™s devious mind must have been grafting overtime. This part of Druryâ€™s statement is worth quoting in full here:

â€˜The other matter which I wish to bring to attention is this, and it relates to the murder of Reginald Stevens, the postmaster who was shot dead at Luton on 10th September, 1969, a matter which I was responsible for investigating whilst attached to the Murder Squad. Three men were convicted of this crime and since conviction, one of them, namely Patrick Colin Murphy, has, through his father, Stephen George Murphy, been endeavouring to obtain a fresh trial, on the grounds that he was wrongly convicted. In support for the movement for a new trial, two reporters, one from the â€˜Redbridge Gazetteâ€™ and one from â€˜The Sunday Timesâ€™, who at this stage I do not wish to name, conducted a newspaper campaign on behalf of Murphy. In October of last year, I think the 16th, they called on me at New Scotland Yard, to discuss what they considered to be fresh evidence in the case of Murphy. I told them that if they were in possession of fresh evidence, they should hand it to the solicitors responsible for Murphyâ€™s defence or, if they preferred, I would report the matter to the Director of Public Prosecutions. After a general conversation they left me and I have seen neither of them since. I have now received reliable information that the reporter from the â€˜Redbridge Gazetteâ€™ who, I have ascertained, is no longer employed by them but now employed by the â€˜Sunday Peopleâ€™ has approached a man currently on bail in South London, who has a relative working on the â€˜Peopleâ€™ asking him if he knows Humphreys, which he does, as he, the reporter, wished to â€˜fit me upâ€™ because I am supposedly alleged to have been responsible for him being sacked from the â€˜Redbridge Gazetteâ€™. The man on bail refused to have any part of this. I am still making enquiries in an endeavour to gain absolute confirmation of what has taken place and if and when I do I will report the matter officiallyâ€¦â€™

Druryâ€™s ploy was to plant the seed of doubt about the motivations of the journalist investigating the safety of Murphyâ€™s conviction, to imply that this journalist had a personal vendetta against him. Of course, Drury knew full well that Murphyâ€™s conviction, and also Cooper and McMahonâ€™s convictions, were unsafe, as he had fitted all three up. By getting it on the Metropolitan Police record by means of his internal investigation statement, Drury was laying calculated foundations. This was in case the unnamed journalist who had smelt a fat stinking rat in the corrupt framework of Druryâ€™s Luton Post Office Murder convictions came up with real allegations of corruption against him which could stick.

That journalist now worked for the Sunday People, and that newspaper had started the exposure of Druryâ€™s connections to Soho vice shortly before, after a tip-off from the south London gangster Joey Pyle, a friend of the framed Patrick Murphyâ€™s father. For Drury, it was obviously all about getting it on the record, and in this he succeeded. Just six days after Druryâ€™s statement, the reference made about the journalist found its way into the 16 March 1972 report made by the Metropolitan Police No.1 Area Inspectorate, just one of ninety-six points, for the eyes of the Deputy Commissioner:

â€˜A news reporter, formerly employed by the â€˜Redbridge Gazetteâ€™, who now works for the â€˜Sunday Peopleâ€™, might be vindictive towards him (Drury) because he was allegedly responsible for the reporter being dismissed from his earlier employment.â€™

It is believed that the â€˜man currently on bail in South Londonâ€™ mentioned by Drury in his statement was the late Joey Pyle. The journalist in question has been identified, but could not be traced now for comment, so it would be unfair to publish his name here.

So what did Drury do in the investigation of the Luton Post Office Murder? He venally and wilfully framed three men, one of whom served almost four years in prison, with the other two serving almost eleven years, ruining their lives, hopes and dreams. In the words of the late Sir Ludovic Kennedy, â€˜In the Luton case, there was no question of the officer in charge, Det. Chief Superintendent (later Commander) Kenneth Drury believing that Cooper and McMahon were guiltyâ€¦he knew for a fact that they were innocent.â€™ Druryâ€™s handiwork also led to the bribing of two prison inmates to give false evidence against McMahon. Drury also convinced a witness to alter his evidence against Cooper and got his men to work on another whilst at the same time preventing him from being a witness for the defence. Drury made the picking out of McMahon in an ID parade much more likely by identifying him to the witness prior to the parade, and held back the evidence of two witnesses whose evidence was supportive of Cooper and McMahon from their defence team. Finally, Drury did an unbelievably corrupt deal with a guilty man who had planned and taken part in the failed armed robbery in Luton that day which led to the death of Reginald Stevens, taking a large share of the Â£5,000 Post Office reward money for himself.

Apart from profiting financially, Drury had got three convictions and seemingly turned another guilty man. It was a very high-profile case which had been rightly greeted with widespread public revulsion and put the Metropolitan Police under enormous pressure to catch the culprits. Drury now looked like a â€˜murder whizâ€™ and he had moved further up the greasy pole of promotion. They were excellent â€˜nicksâ€™ in the eyes of his superiors, but the question has to be asked about how culpable of corruption Druryâ€™s subordinate police officers were in the Luton Post Office Murder frame-up too. But then, they would say that they were just following orders, the orders of then Det. Chief Superintendent Drury.

Although they had been released after serving nearly eleven years, the whole trauma had taken a toll on both David Cooper and Michael McMahon. In January 1993, Cooper was found dazed and wandering aimlessly with a large cut at the back of his head. It was never determined whether he had fallen or been hit. In September of that year, Cooper died, aged just fifty-one. On 25 June 1999, Michael McMahon would also die prematurely, aged fifty-five. It was his birthday.

Both men had been almost broken by Druryâ€™s fit-up, suffering much mental anguish and turmoil. In May 2000, Cooperâ€™s long-time lawyer Gareth Peirce put the cases of Cooper and McMahon forward for another appeal. Pierce wrote that â€˜The writer of these submissions has no doubt that the life and health of each was drastically affected by the eleven years each spent in torment in prison.â€™ That Appeal, the sixth, finally opened on 31 July 2003 and on the next day, the convictions of Cooper and McMahon were quashed, more than thirty-three years after they had been given, and almost twenty-three years after their release. The late Sir Ludovic Kennedy was in court that day, and said that he was delighted, but that it should have happened years before. It was finally justice, but both Cooper and McMahon were already dead, and their families had had to deal with all that despair too, for so many years.

Just over a year after the unsafe convictions of Murphy, Cooper, and McMahon, Kenneth Drury was a Commander and Head of the Flying Squad. Drury died in 1984. Strangely he had never been prosecuted for his corruption in the Luton Post Office Murder, despite already being in prison when Cooper and McMahon were released in 1980, their convictions deemed unsafe, and Ludovic Kennedy and others expertly and starkly exposing Ex-Commander Druryâ€™s corruption in that case in his book, which led to their release.