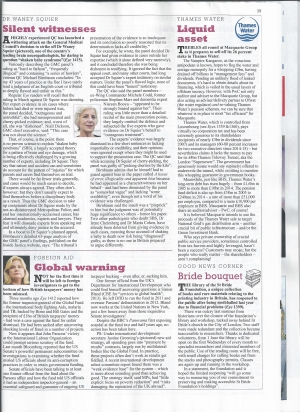 Frustration must have grown for Dr Jennian Geddes, one of the expert witnesses who gave evidence on behalf of Dr Waney Squier who has asked the Chair of the Tribunal which found Dr Squier guilty of malpractice how to formally lodge a complaint about the â€œdeplorableâ€ treatment of four of the five experts who appeared before the Tribunal panel.  Dr Geddes has repeatedly asked HOW she should lodge a formal complaint but so far the question on how to complain about the panel dedicated to addressing complaint has been ducked.

Read the correspondence chain in â€œDr Waney Squier Struck Offâ€¦â€ in the Articles section of this site.

Mark McDonald from Mansfield Chambers is organising a conference on the 4th of June in the Great Hall, Lincolnâ€™s Inn. The conference addresses the very pressing issue of the approach taken by the Courts and others in dealing with those experts who challenge accepted scientific theory in Criminal, Family and Immigration Courts.

An example of which is the prosecution and subsequent de-registration of Dr Waney Squier, a leading expert on shaken babies. There is now understandable concern by those who rely heavily on experts such as Dr Squier, who have the ability and courage to challenge the prevailing scientific orthodoxy, that her testimony is now prevented following her referral by the police to the GMC. There is the prospect now of countless wrongful convictions because defence witnesses, particularly those who challenge the consensus, are fearful of giving evidence given the treatment of Dr Squier.

By contrast the Courts have applied a liberal approach to prosecution experts. In the last two decades there has been increased reliance by the prosecution upon a wide range of scientific experts. Such expert evidence has convicted innocent people because juries are not equipped to deal with complex scientific data. Often expert evidence, such as analysis of DNA, can form the sole basis for conviction. Yet juries convict because of a perception that science cannot be wrong. The vicious cycle of scientific orthodoxy and injustice goes on and on.
Below is the link to eventbrite website. The speakers are arguably the leading human rights advocates in the UK and internationally: Michael Mansfield QC, Clive Stafford Smith as well as Dr Waney Squier.

Regular readers to this site will already have seen the forensic analysis carried out by senior silk Michael Birnbaum QC of the written decision of the Tribunal which end the award winning career of shaken baby expert Waney Squier.  It can still be viewed in the Articles section of this site, and in Private Eye, which neatly encapsulated events.

Further coverage can be read at http://thejusticegap.com/2016/05/silencing-dr-waney-squier/