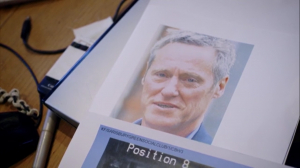 Inside Justice has launched a new short film in an effort to get all police forces to follow guidance and store evidence properly.
Inside Justice is campaigning for the police to adhere to guidance around post-conviction storage and retention of evidence collected from crime scenes so that if someone claims they are innocent, they can prove it through forensic testing and analysis.
The new video features a case involving Roger Kearney, a client of Inside Justice who has been in prison since 2010 for a murder he claims he did not do.
In a major BBC documentary, Conviction: Murder at the Station viewers saw Inside Justice’s Louise Shorter investigate his case only to find that the physical evidence, including tapings from the victim’s clothing and a carrier bag which had a bloody handprint on it, had been lost, contaminated or destroyed by the police.
While the charity has continued to support Roger Kearney, the destruction of this evidence was a bitter blow to the case. Roger remains in prison today and strongly denies any involvement in the murder.
Louise Shorter, CEO of Inside Justice, said: “Our intention was to re-test these crucial items from the crime scene which we were calling eye-witnesses to the murder. New techniques in forensic testing are emerging all the time and we felt we had a real chance of identifying the killer. It was crushing to the investigation, to Roger and his family when it was revealed that the evidence was gone.
“What made this more surprising was that we knew there was guidance in place to stop this kind of thing from happening.”
The two key sets of guidance which police forces should adhere to are set out in the Criminal Procedure Investigation Act 1996 (CPIA) and outlined in the National Police Chiefs’ Council (NPCC) Guidance.
Through Freedom of Information requests the charity found that 8 out of 10 police forces in England and Wales are unaware of the current NPCC guidance on retention and storage of evidence which states exhibits in the most serious category of crime should be kept for at least 30 years.
“We need to have all 43 police forces following this NPCC guidance so that cases like Roger Kearney’s never happen again. Without that, claims of innocence cannot be objectively tested and the risk of miscarriages of justice continuing to happen remains high.”
Gavin Stephens, Chief Constable of Surrey Police, said: “Policing cannot operate without the confidence of our communities. There are lots of things that make up confidence; one of them is the fairness of the justice process.
“Occasionally, of course, there are miscarriages of justice and it’s vitally important in those cases that the police are seen to quickly engage in being part of the solution to putting things right. Having really high standards of retention helps with those historic reviews and with cold case reviews and the national guidance is something to pay very close attention to.”
You can watch the short film ‘What happens when evidence isn’t kept?’ on our YouTube channel. https://youtu.be/_Q13rGl4xMI
ENDS
Notes to editors: