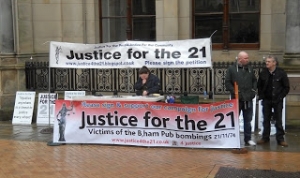 The home secretary Priti Patel MP is to consider the case for a public inquiry into the 1974 Birmingham Pub Bombings.
The blasts at the Mulberry Bush and Tavern in the Town pubs on the night of 21 November killed 21 people and injured 220.
Their families along with a campaign group, Justice for the 21, have long called for a public inquiry into what happened.
Priti Patel said she "recognised the desire to see those responsible brought to justice".

Fresh inquests last year ruled the victims were unlawfully killed, but did not establish who was responsible.

A flawed investigation by West Midlands Police led to the wrongful convictions of the Birmingham Six – one of the worst miscarriages of justice in British legal history. The six men - Hugh Callaghan, Patrick Joseph Hill, Gerard Hunter, Richard McIlkenny, William Power and John Walker were each sentenced to life imprisonment in 1975 following their false convictions.

West Midlands Police said there continued to be an active criminal investigation into the case.