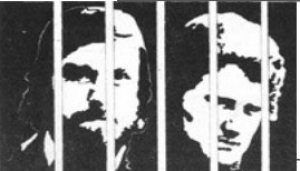 The Court of Appeal has today overturned the convictions of 14 men sentenced for their involvement in pickets in 1972.
Trade unionists who picketed during the national builders' strike were charged with offences including unlawful assembly and conspiracy to intimidate.
Lawyers for the 'Shrewsbury 24' had argued the destruction of witness statements made their convictions unsafe.
Lord Justice Fulford said "what occurred was unfair".
The Royle Family star Ricky Tomlinson was among those convicted and jailed for two years.
Speaking after the verdict to the BBC, he said: "It is only right that these convictions are overturned."

Six of the 14 who brought the action have since died, including Dennis Warren, who was jailed for three years.

Lord Justice Fulford said: "If the destruction of the handwritten statements had been revealed to the appellants at the time of the trial, this issue could have been comprehensively investigated with the witnesses when they gave evidence, and the judge would have been able to give appropriate directions.

"We have no doubt that if that had happened, the trial process would have ensured fairness to the accused. Self-evidently, that is not what occurred."

Image credit: The Official Shrewsbury 24 Campaign |To Overturn A Miscarriage Of Justice